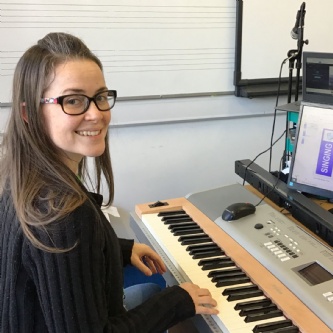 A teacher at Etonbury Academy is bringing a community together through lockdown, by recording a song uniting a trio of BEST schools.

Emily Hardy, Head of Music at the extended secondary school in Arlesey, has written the ‘BEST Song’ which pupils have been learning during live remote lessons this term.

The project sees Year 5 and 6 pupils at Etonbury join forces in a virtual choir with children from Gothic Mede Academy, also in Arlesey, and Robert Bloomfield Academy in Shefford.

With all three schools part of BEST, the song title reflects our acronym.

Mrs Hardy, pictured, said she devised the project after the success of a community musical advent calendar, which she ran online in the lead-up to Christmas.

She said: “I’m one of those people who as soon as I’ve finished one thing I’m looking to what I can do next, so I wanted to keep the momentum going from the advent calendar.

“The other schools are also part of BEST, which is why I went down the community route and wrote the song about that.”

The song features a variety of different vocal techniques which pupils have focused on during each lesson, before sending their individual recordings to Mrs Hardy to piece together. Listen to it below!

Mrs Hardy said the project had been a challenge due to the constraints of remote learning, but pupils at all three schools had been really engaged with it.

She added: “With singing it has to be a little bit limited. You can’t have the children turning on their microphones and singing at the same time, because with the delay you get on the internet it sounds awful.

“So I could see their faces and they could hear and follow me, but I couldn’t hear their voices. But every day as I’ve been getting more recordings in I can finally hear what their voices are like and it’s been really lovely. They’re singing on their own but it is all coming together.”

Etonbury Academy Principal Ian Evason said: “It has been a brilliant opportunity for Etonbury to work with other BEST schools. Along with the musical advent calendar, Emily has really brought some fun to our community.”