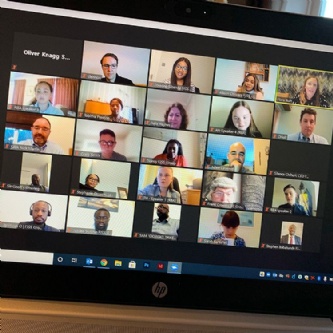 Should statues of notable people with links to the slave trade remain or be toppled?

That was the burning issue students from two BEST academies locked horns on in a thought-provoking virtual debate.

The pupils from Robert Bloomfield Academy in Shefford and Samuel Whitbread Academy in Clifton were taking part in a special edition of the Heritage Debate Series, organised in conjunction with the Fair Justice System for Scotland (FJSS) Group.

The Zoom event – which had 100 people in attendance on Tuesday 13 April – also heard a keynote address by Sir Geoff Palmer OBE, professor emeritus at Heriot-Watt University in Edinburgh, who is considered one of the greatest authorities on the topic.

Robert Bloomfield’s Year 8 debaters argued that statues should remain, but with plaques added to explain their links to the slave trade.

The Year 10 team at Samuel Whitbread, which included one Year 9 student, contended the statues should remain as they are – and that much-needed education on this topic was required elsewhere.

The upper school’s Year 12 students concluded the debate by arguing the statues should be removed.

“Having the opportunity to work with an organisation such as FJSS, and hear from Sir Geoff Palmer OBE, was an amazing opportunity and I’m sure one they will never forget.

“The role of statues that honour those with a history of involvement in the slave trade is a contentious one, so giving young people the opportunity to debate this issue with someone who is widely regarded as a leading figure in this area was truly fantastic. I’d like to thank everyone involved in organising such a worthwhile event.”

Sam Farmer, Principal of Robert Bloomfield Academy, said: “What was most striking to me was the depth and quality of research every student undertook in order to fully explore the arguments presented. Debating is a skill which requires years of fine tuning, but on this occasion every student excelled.

“This was a thrilling evening and a huge thank you and well done from me to all who took part, but especially to the RBA Year 8s taking their first steps onto the debating stage.”

Silence Chihuri, CEO of the FJSS Group, said: “The inaugural High Schools Heritage Debate Series was a huge success well beyond what we had imagined. The students and their teachers worked so hard to make the event come together the way it did.

“We are so excited about this and discussions with our partners at Samuel Whitbread and Robert Bloomfield Academies will continue to explore how we can make this an annual event involving more schools nationally.

“This is a great learning experience for the students and we look forward to more future events like this.”